At the hospital in Steffy’s room, Thomas can’t believe this is happening. Ridge holds Taylor as they assure their daughter that they are there for her.

In Sheila’s room, Deacon tells her he’s sorry — he knows how much she loved Finn. Sheila sniffles, “Don’t say ‘loved’.” Deacon can’t get over the shooting and Finn being gone.

In the cabin, Hope and Liam decide to take full advantage of the silence and start ripping each other’s clothes off. Just then, Brooke enters and Hope loudly reminds her the kids aren’t there. Liam, feeling bad, invites her to stay if she wants to talk. Hope shoots him a look but asks her mom, “What’s going on?” Brooke admits, “I’m worried about Ridge. It’s this feeling I have.” It’s not based on anything other than the connection she has with him. She just feels something is terribly wrong. “Something feels off.” Hope thinks it makes sense since they’re apart right now. Liam knows Taylor’s presence complicates things, but it’s good he’s not alone right now. Hope believes he’ll eventually come back to her mom. Brooke thinks maybe it’s good for Ridge to spend time with his children. He adores them but worries he didn’t give Steffy enough attention when she was younger. He has a lot to make up for. “Life is short.” 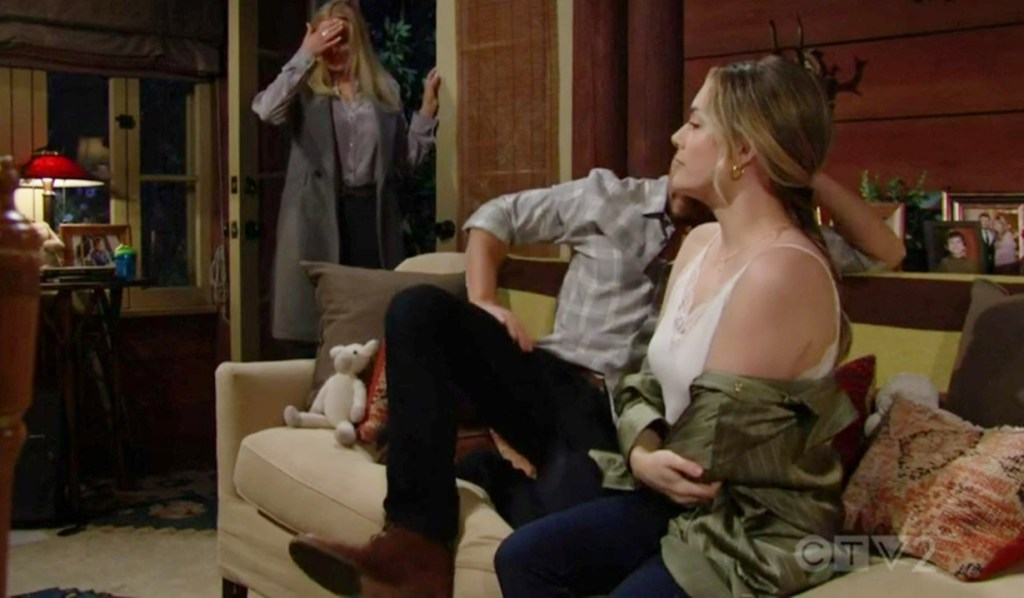 At the hospital, Ridge urges Steffy to take all the strength she has and come back to them. It’s not going to end like this because some random person wants to take away their future. Thomas takes their place by his sister’s side and laments her being so still — she’s always in motion. He tells her she needs to come back because the kids need her. He breaks down. “And I need you. You’re my best friend.” Thomas pleads with her to come back to them as he cries. Bridget comes in and needs to examine Steffy, so the family steps out. 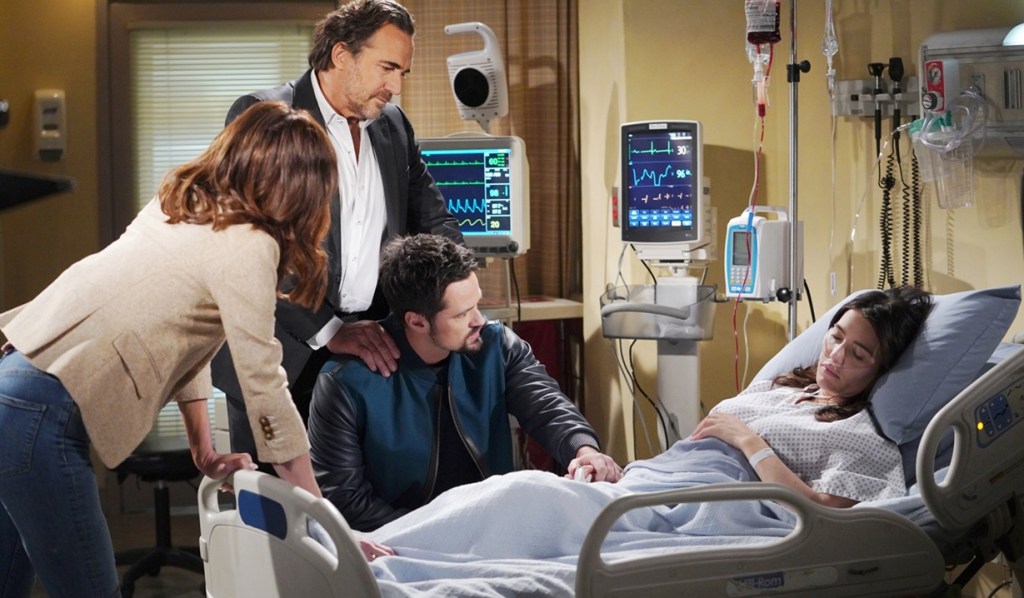 In the hospital corridor, Thomas asks, “What the hell happened tonight?” Ridge doesn’t know and blusters about Finn being gone. Taylor exclaims, “He’s just gone!” She wonders what kind of monster would shoot them and leave them lying in an alley. “Who would do this?!?” 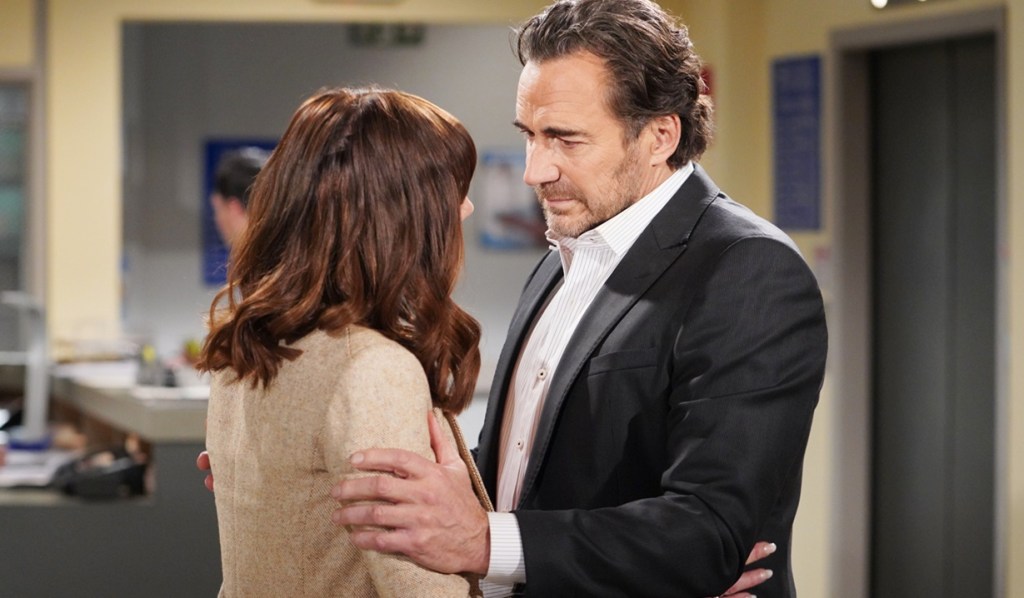 At the hotel, Deacon doesn’t know what to say to help Sheila. He places his coat over her and lies beside her on the bed. She asks about Deacon finding them. He explains he was taking the trash out. She asks if he saw anything else that would point to who did this. Deacon says whoever it is, is long gone. He wonders what kind of sick person would do such a thing. Sheila flashes to doing the shootings. Deacon tells her, “Sheila. I’m with you.” Sheila can’t understand what he was doing in the alley — it doesn’t make sense. She cries, “I was getting to know him.” She breaks down again as she says she loves him so much and now that future is just gone. Deacon is so sorry. Sheila sobs in his arms. 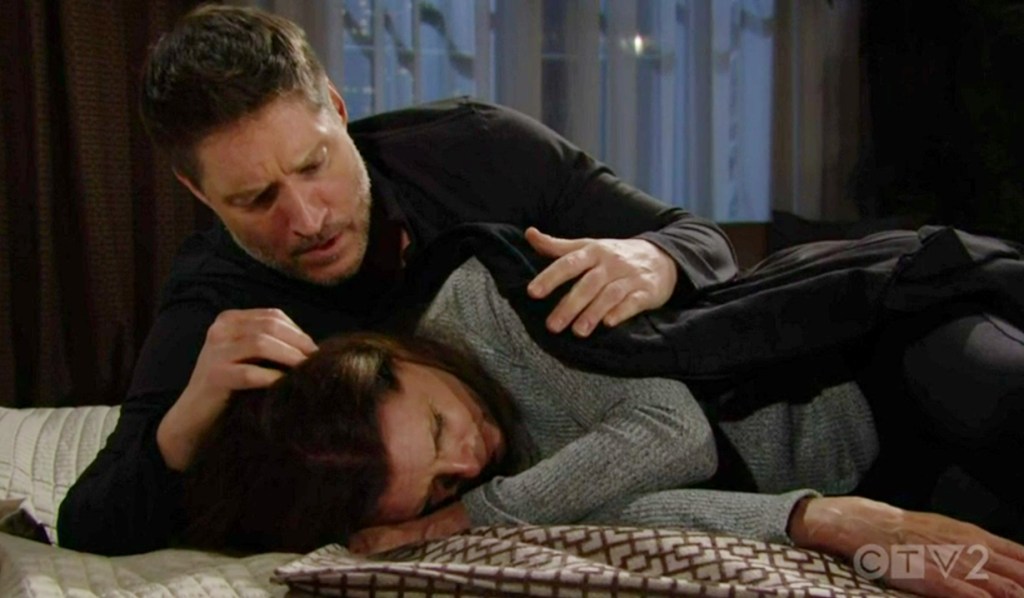 At the cabin, Brooke frets as Ridge still hasn’t responded to her. Hope realizes this feeling she has is really doing a number on her. Brooke thinks that means there’s something to it. Ridge is her husband and if he’s going through something she wants to be there for him.

In the hospital waiting area, Ridge bellows, “What happened in that alley?” Thomas wonders what they were doing there. “Steffy can’t…” Taylor assures him Steffy isn’t going anywhere. Thomas wonders if Steffy saw Finn get shot. Taylor can’t help but think about Sheila right now. “Finn is gone.” 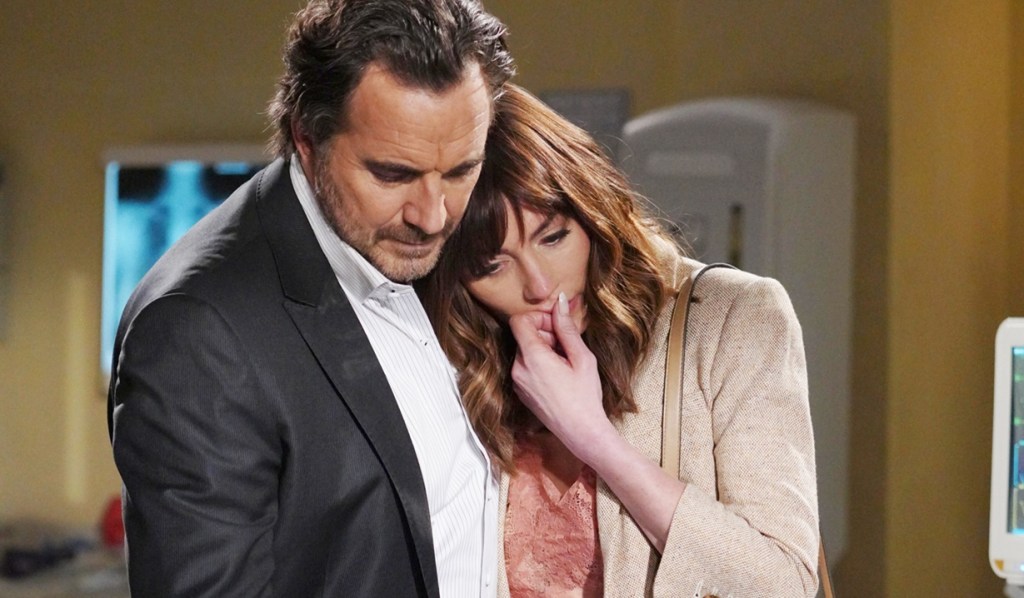 In her room, Deacon assures Sheila that her son knew she loved him. She wants to go to the hospital to see him one more time. Deacon warns she may run into Steffy’s family — he had to call Ridge and tell him his daughter was shot. He’s guessing Ridge, Taylor and Thomas made a beeline to the hospital to urge her to fight. Sheila’s confused when he talks about Steffy pulling through. Deacon tells a stunned Sheila that Steffy is still alive.

At the cabin, Brooke keeps checking for a message from Ridge. Hope and Liam wonder if there’s anything they can do. Brooke is grateful for their support and says she loves them. Just then, a knock comes at the door. It’s Deacon. He wanted to check and see if they were okay. Looking at their expressions, he quickly realizes they didn’t hear. Brooke asks if something’s wrong. “Is it Ridge?” Deacon warns they need to brace themselves for a shock. Hope says he’s scaring her. Deacon relays that he was working at Il Giardino tonight and took the garbage out back… that’s when he saw them. Liam asks, “Saw who?” Deacon replies, “Finn and Steffy. They were shot.”

At the hospital, Ridge laments that a little boy lost his dad tonight. Taylor exclaims that Steffy is going to need them like never before. Thomas is angry that Finn is gone and Steffy’s fighting for her life. Taylor reassures him, but admits she’s scared. Ridge is too. The elevator opens and Sheila appears. “How’s Steffy.” Thomas tells her she’s alive. Ridge adds, “Barely, but we’re grateful.” Taylor tells Sheila she’s so sorry for the loss and pain she must be feeling right now. She pulls her into a hug. Thomas frowns when Sheila replies, I’m sorry. I’m so sorry.”

Next on The Bold and the Beautiful: Li upsets Sheila, and Steffy’s family rallies.

Please note that if you purchase something by clicking on a link within this story, we may receive a small commission of the sale.

Miss today’s episode? Catch up via Paramount Plus.