Fans are seeing a whole new side of Pete Davidson since he began dating Kim Kardashian.

In mid-March, the SKIMS mogul sent her followers into a frenzy when she made her romance with Davidson Instagram official, sharing two personal photos with the “Saturday Night Live” star. One photo showed Davidson lying back into Kardashian’s lap while he looked up at the “Keeping Up with the Kardashians” star as she seemingly leaned in for a kiss. The other photo was a blurry selfie of the two.

Their relationship appeared to get even more serious when Davidson, 28, made his love for the reality TV star permanent in the form of a branding on his body with Kardashian even sharing Davidson’s tat of “MY GIRL IS A LAWYER” on her Instagram Story.

Most recently, Kardashian and Davidson have reportedly taken the next step in solidifying their romance by introducing their families. According to reports, Davidson recently introduced the A-lister to his grandparents while the two were in his native New York.

Although Kardashian’s new relationship with Davidson took fans by surprise amid her divorce from Kanye West, the mother of four appears to be head over heels for the funnyman. She gushed over Davidson during an appearance on “The Ellen DeGeneres Show,” and said she’s prioritizing her happiness at the age of 41.

KANYE WEST TELLS KIM KARDASHIAN HE IS ‘GOING AWAY TO GET HELP’ AMID PUBLIC SOCIAL MEDIA FALLOUT: REPORT

Kardashian’s relationship has led to some drama, however. In February, she told a judge she’s suffered from “emotional distress” following West’s social media outbursts about her relationship. On Friday, a report claimed West recently informed Kardashian he would refrain from making public appearances or social media statements. 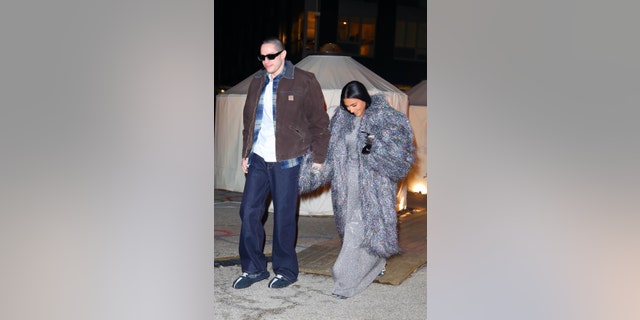 “For the sake of the kids, Kanye has told Kim he’s not making any public appearances or inflammatory social media statements, and he will go away somewhere to get better,” a source close to the Kardashians relayed to Page Six.

The insider said it remains to be seen whether West, 44, is planning to check into a treatment center or if he is simply removing himself from the public limelight and social channels.

Meanwhile, it was revealed last month that fans will learn more about Kardashian’s relationship with Davidson in the upcoming Hulu series “The Kardashians.” But before that, Fox News Digital is taking a look at how Davidson’s life has evolved since courting one of the most famous celebrities on the planet.

Keeping up with the Kardashian-Jenners

The comedian, who rose to fame due to “Saturday Night Live” and movies like “King of Staten Island,” is known to be friends with many stars including Machine Gun Kelly, and has dated a number of high-profile women prior to Kardashian, but his new relationship has led to him rubbing shoulders with celebs fans haven’t really seen him spotted with before namely the Kardashian-Jenner group.

One of the earliest moments that suggested the two were more than just friends was when rapper Flavor Flav shared a photo of himself hanging out with Kardashian, Davidson and Kardashian’s mom Kris Jenner in November.

AS KANYE WEST IS DROPPED FROM GRAMMYS, PETITION GROWS TO NIX HIM FROM COACHELLA; ‘WHAT HAPPENS NEXT?’: EXPERTS 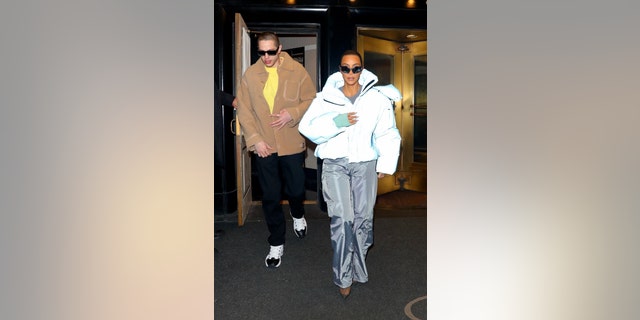 “Pete,,, I never took a clock off my neck to give to someone and you will be the last person I do this for,,, it lookz real good on you,,,, happy birthday,,,,” the rapper added.

According to reports, Kardashian made the meet-and-greet with Flavor Flav happen after she learned he’s one of Davidson’s idols.

Davidson has also gotten closer to some other members of the Kardashian-Jenner clan. In January, it was reported that Kardashian and Davidson joined Khloe Kardashian for a night out, which included a Korean barbeque dinner and an escape room experience.

Meanwhile, it appears Davidson is also getting along quite well with Scott Disick, who is the father of Kourtney Kardashian’s three children and is still a close friend of the family.

Davidson recently shared evidence of his newfound bromance with Disick after sharing a funny video of their “boyz night,” which showed Disick passed out on the couch. Disick also joined Kardashian and Davidson for a movie night in New York in December.

Davidson has also made headlines for his friendship with Amazon founder Jeff Bezos.

In late January, Davidson and Kardashian made headlines for paying a visit to the billionaire’s sprawling Los Angeles mansion.

TMZ reported that the pair was at the Amazon founder’s residence for a dinner party. After spending “hours” there, Kardashian’s car was spotted pulling into the Beverly Hills hotel, where Davidson often stays during his West Coast visits. 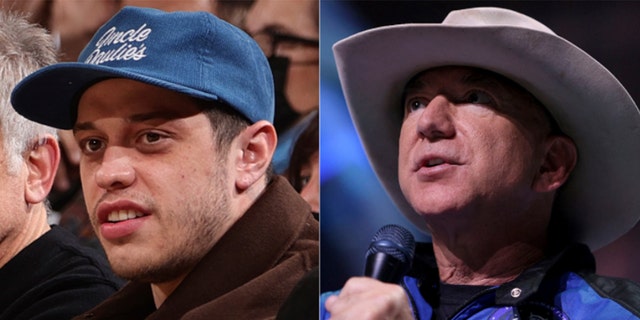 Pete Davidson had to scrap his plans to join Jeff Bezos’ Blue Origin flight on March 29 due to scheduling issues.
(Getty Images)

Then, Davidson was tapped for Bezos’ Blue Origin’s human spaceflight on March 23. However, Davidson had to back out after it was rescheduled to March 29 due to scheduling issues.

“Blue Origin’s 20th flight of New Shepard has shifted to Tuesday, March 29. Pete Davidson is no longer able to join the NS-20 crew on this mission,” the aerospace company tweeted. “We will announce the sixth crew member in the coming days.”

The mission marked Blue Origin’s fourth human spaceflight for its New Shepard program and the 20th in its history.

Davidson, who is a native of Staten Island, made headlines in February when it was revealed that he’s upgrading his digs by making the move to Brooklyn.

In an interview with NBCLX, Davidson revealed that he was in the process of moving apartments.

The interview also gave fans an inside look at some of his decor, which featured a candle of his girlfriend Kardashian. It was during this interview that he dubbed Kardashian the title for the first time publicly.

A TIMELINE OF PETE DAVIDSON’S ROMANTIC ESCAPADES, FROM ARIANA GRANDE TO KIM KARDASHIAN

Fans wondered if his move from Staten Island to Brooklyn had anything to do with Kardashian’s recent entrance into his life. He maintained that he still has love for his hometown, but that it “takes too long to get over the bridge.” 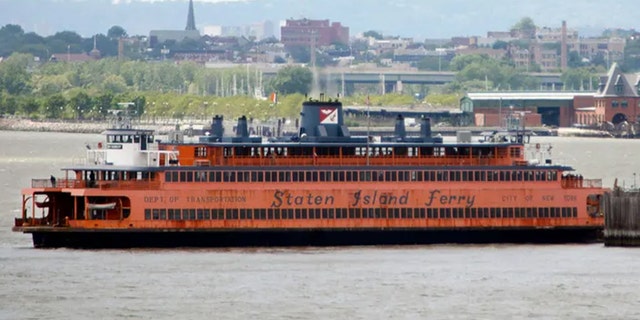 ‘Saturday Night Live’ stars Colin Jost and Pete Davidson have bought a decommissioned Staten Island Ferry and intend to turn it into a nightclub.

In keeping up with his love for Staten Island — which he often mocks in his parody projects — it was revealed in January that he and “SNL” co-star Colin Jost purchased a decommissioned Staten Island Ferry with the hopes of turning it into a nightclub.

The comedic duo put down the winning bid for the John F. Kennedy, a 277-foot (84-meter) vessel that shuttled commuters between the New York City boroughs of Manhattan and Staten Island from 1965 until it was taken out of service last August.

“The Staten Island Ferry is definitely something iconic,” Paul Italia, a real estate investor and co-owner of the restaurant and comedy club The Stand, said at the time. “We wanted to figure out a way to save it and to do something special with it.” 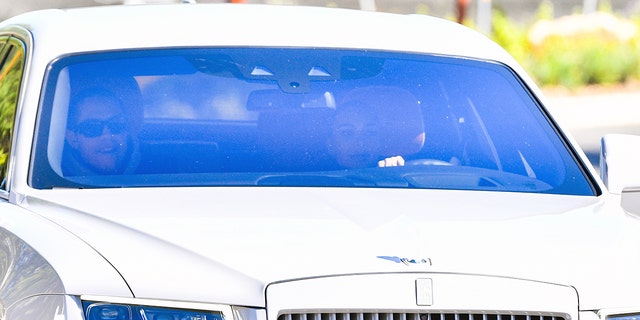 Kim Kardashian and Pete Davidson are seen out for a drive on March 22, 2022 in one of the reality star’s luxury cars.
(MEGA/GC Images)

The transformation of the ferry won’t be complete any time soon, but Italia claimed the project is in “really early stages.”

Reality superstar and mother of 4, Kim Kardashian, and boyfriend Pete Davidson took their love to the Bahamas in January.
(Backgrid)

Speaking of traveling, Davidson has been photographed transporting around the world in style since dating the SKIMS founder. At the start of the year, the pair jetted off to the Bahamas for a sun-filled getaway via a private jet. The trip was the first international trip for the couple.

In March, Davidson and Kardashian were spotted stepping off another private aircraft after touching down in New York City.

It appears Davidson has also gotten quite familiar with Kardashian’s multiple luxury cars. Last month, Kardashian was spotted behind-the-wheel of her custom Maybach Sedan while the comedian was riding in the passenger’s seat.

In another surprising moment, Davidson was spotted driving Kardashian’s Rolls-Royce while out and about in Beverly Hills.

While Davidson is still technically a New Yorker, he’s been spending a lot more time in Los Angeles in the months he’s dated Kardashian. The couple has taken their romance bi-coastal, with Kardashian touching down in New York when her schedule allows, but it seems Davidson has been making plenty of California trips to see the mother of four.

And it seems Kardashian’s LA lifestyle is rubbing off on Davidson. The pair has been photographed frequenting numerous LA hotspots together, such as the famed five-star Beverly Hills Hotel. 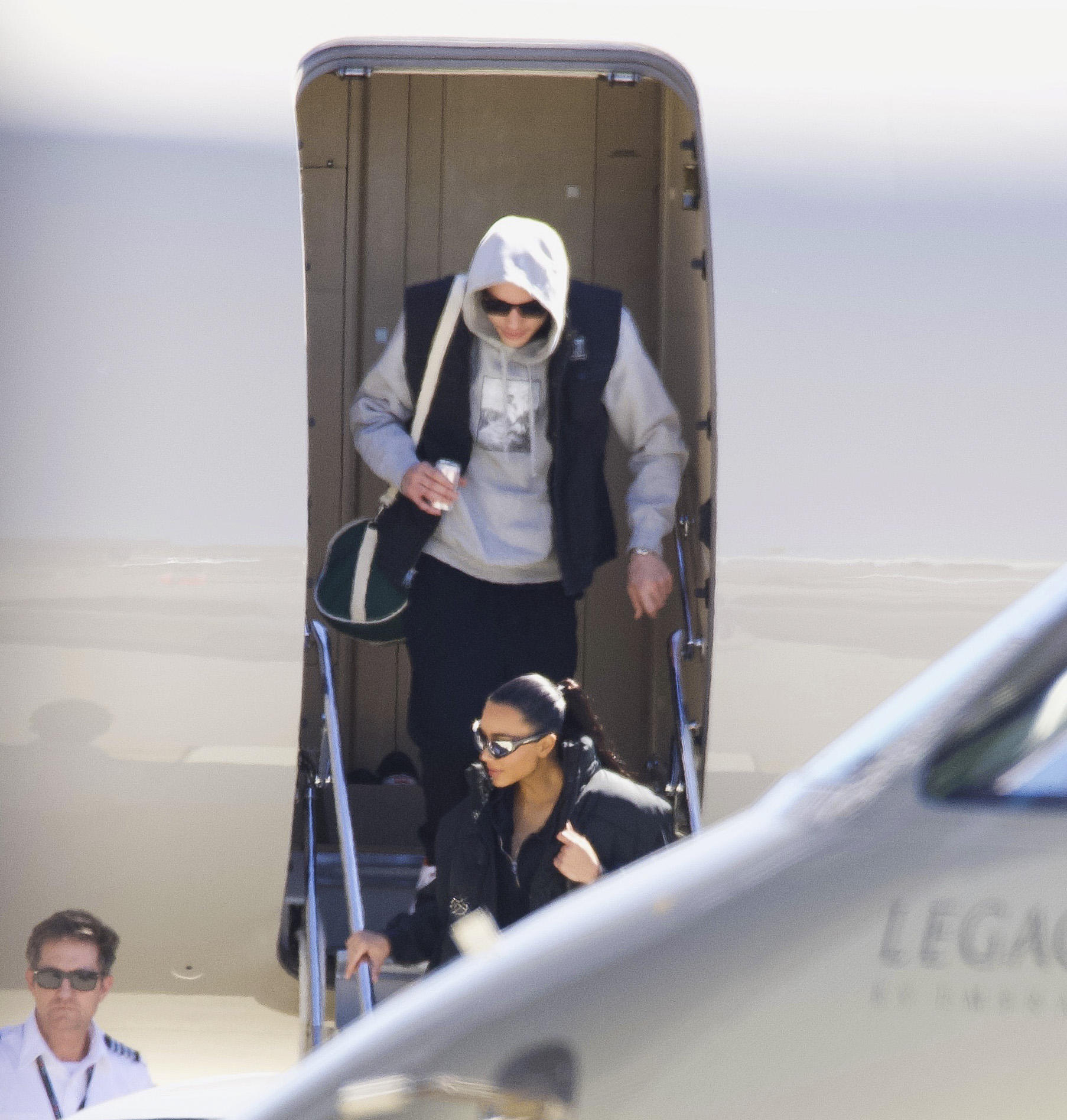 Kim Kardashian West and Pete Davidson step off a private jet in LA after a quick stop in NYC.
(Diggzy/Jesal/REX/Shutterstock )

Last month, leaked text messages between West and Davidson allegedly showed the comedian inviting West to his hotel room at the luxe hotel on Sunset Boulevard.

Fans also caught a glimpse of the lovebirds there last month, when blogger Casey Messer shared an Instagram reel of the pair walking through the hallways.

Davidson has also joined Kardashian at a number of popular eateries in the LA area, including the luxurious Giorgio Baldi Italian restaurant and Jon & Vinny’s for a pizza date, where they famously were seen packing on the PDA at a corner booth they had to themselves.

Only time will tell if Davidson plans to join Kardashian in her home state of California permanently.