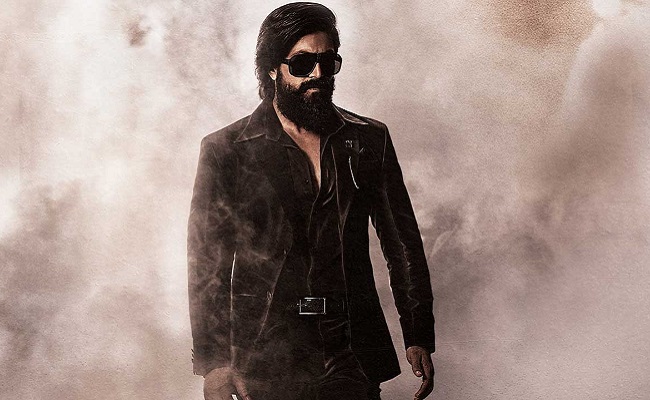 “KGF”, originally made in Kannada and released in Telugu, Tamil, Hindi, and Malayalam languages simultaneously, was a box-office phenomenon. The second part “KGF 2” already took the box office by storm with massive advance sales.

The pre-release buzz was on par with “Baahubali 2”. Is the second part worth all the hype? Let’s find out…

Story:
‘KGF 2’ begins with the aftermath of Garuda’s killing. Rocky Bhai (Yash) who created an army of his own in KGF becomes the most powerful man.

Meanwhile, Adheera (Sanjay Dutt) arrives to reclaim KGF. Plus, Inayat Khalil and Prime Minister Ramika Sen (RaveenaTandon) are closing in on him.

Can Rocky deal with these powerful people? What fate is in store for Rocky? Will his girlfriend Reena (Srinidhi Shetty) unite with him?

Artistes’ Performances:
Yash who has got terrific swag mesmerizes us again with his style and intense performance. In the first part, he didn’t get a chance to wear designer clothes. Here, as the richest don, he wears colorful suits and grooms himself well. He oozes style in every scene. He gets dialogues that suit his mass persona. His performance is also terrific.

Sanjay Dutt as Adheera is stunning as his getup goes. His imposing personality and his demeanor have suited well to the powerful character. But his role is not that effective for the main antagonist.

Raveena Tandon steals the moments she is in. She has got her look right and has delivered a powerful performance.

Srinidhi Shetty gets a lengthier role than what she was offered earlier. Eeswari Rao makes her presence felt.

Besides Sanjay Dutt and Raveena Tandon, Prakash Raj is the new addition to the world of KGF but didn’t get a role worth talking about. Rao Ramesh has a decent role.

Technical Excellence:
The action sequences are stunning. Anbriv has come up with adrenaline-rushing episodes this time as well. Ravi Basrur’s background score enhances the overall experience. The cinematography and the production design are grand. But the visual effects are not effective in certain parts.

Drawback:
The emotional quotient is not strong

Director Prashanth Neel doesn’t waste time drawing us into the world he has created in KGF. Like in the first part, the film begins with a journalist interviewing a writer who documented the developments in the Narachi Company. In the second part, Ananth Nag’s son Prakash Raj steps in to narrate the story.

Since we have already seen the story of Rocky from being an assassin to the don of KGF, the focus of the second part is on his problems with the new batch of forces.

If we see the history of gangster movies, the ‘rise’ of a don always makes an interesting watch, but his ‘rule’ doesn’t. In “KGF 2”, Prasanth Neel has played his game well. There are issues with his narrative, but he holds our interest from start to the finish, as the film is filled with many elevating scenes. He elevates heroism to the peak.

So, the drama involving Rocky and his new batch of nemesis is not as gripping. Despite the presence of big stars like Sanjay Dutt and Raveena Tandon pitching against Yash, the drama is not rousing enough.

Four episodes are the main highlight…

1. After Adheera defeats him, Rocky takes a step back and returns with a bang. The scene of Rocky attacking Adheera again in the backdrop of mines is visually stunning.

2. To get one biscuit of gold, he sets an entire police station on fire with a terrific mass moment (you can also see a glimpse of it in the teaser).

3. The scene of Srinidhi informing Yash about her pregnancy

Besides creating adrenaline-pumping sequences, Prashanth has written terrific dialogues. “Ikkade Talale Maaruthai Keereetalu Kaadu” is a fine example of his smart writing. Like in the first part, he abruptly cuts a scene and brings in a narrator-interviewer scene to further proceed the story, thus saving a lot of runtime.

Prashanth Neel mounts the film on a lavish scale and extracts the best output from his music director, cinematographer, and lead hero.

Yash entering the parliament hall with his own army is like taking illogicalness to the extreme. The mother-doctor sequence in the final moments is absurd. The Eeshwari Rao-her son’s episode is another forced drama.

Despite these minor issues and illogical sequences, Neel keeps churning out one cinematically highlighted moment after another.

On the whole, “KGF 2” is a total paisa vasool entertainer. It is a feast to the mass audiences. The film is like a baap of elevations and lives up to the hype. “KGF 2” provides entertainment and gives an immersive experience with mass moments.

Bottom line: Worth the hype