“Riverdale” star KJ Apa and “1883” breakout Isabel May are set to star in the live-action DC superhero comedy “The Wonder Twins” for HBO Max. Apa will play Zan, while May will play Jayna.

“Black Adam” writer Adam Sztykiel is set to write and direct the project.

Marty Bowen and Wyck Godfrey of Temple Hill are producing. Details about the project are being kept under wraps. Production is set to begin this summer in Atlanta. 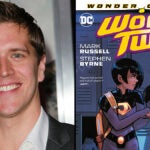 The “Wonder Twins” centers on an alien sibling duo – Jayna and Zan – who can activate their superpowers by touching hands and saying their catchphrase, “Wonder twin power, activate!” Jayna can transform into any animal, and Zan can transform into water. The duo first appeared in the Hanna-Barbera animated television series of the 1970s, “The All-New Super Friends Hour.” The superpowered sibling duo has also appeared on the animated series “Teen Titans Go!” “The Flash” and “Smallville.”

Best known for playing Archie Andrews for the last six seasons on the hit series “Riverdale,” Apa was most recently seen in Michael Bay’s pandemic thriller “Songbird” alongside Sofia Carson. Apa is attached to star in Rod Lurie’s “West Pointer” for Lionsgate. Apa’s other credits include “The Last Summer,” “The Hate U Give” and “A Dog’s Purpose.”

May is the break-out star and narrator of hit Paramount+ “Yellowstone” spinoff series “1883.” Previously, May also starred as Katie Cooper on the Netflix series “Alexa & Katie” and had a recurring role as Veronica Duncan on the CBS series “Young Sheldon.”

Apa is repped by UTA, Matt Luber and Jackoway Austen Tymeran. May is managed by Leanne Coronel, and her lawyer is Patty Felker.