Spoiler alert: Do not read until you have watched “Outlander” Season 6, Episode 6 titled “The World Turned Upside Down.”

Characters on “Outlander” have died in all manner of ways, with some being utterly heartbreaking and some eagerly anticipated. Starz’s historical drama just offed a new but effective cast member with Jessica Reynolds’ Malva Christie being found dead by Claire (Caitríona Balfe) just outside her home on Fraser’s Ridge.

The circumstances around Malva’s death are mysterious and sure to cast a dark cloud over the Ridge. In Sunday’s episode, Malva revealed she was pregnant, claiming Jamie (Sam Heughan) was the father. Despite Jamie and Claire’s attempts to dispel the scandalous allegation, a rebellion based on rumors begins to build around them at the Ridge.

In an attempt to clear her mind over Malva’s allegations and the Ridge turning against her family, Claire puts herself into a deep sleep with ether. Just before doing so, she takes a look outside and spots Malva walking toward the house. Claire locks the door to her surgery room before taking the ether, and is soon haunted by images of Malva saying she and Jamie are meant to be together. When Claire awakens, she finds Malva dead, her throat having been slit in the garden just outside her house.

Reynolds spoke with Variety to talk about her character’s shocking death and what she enjoyed about playing the enthusiastic and enigmatic Malva.

What was your reaction upon learning how Malva would die this season? Did you know based on the script, or were you aware of her death from the books?

When I first auditioned for Malva, I had these sides. I think when I first auditioned, it didn’t even say Sam and Claire, it had different names. I think they were trying to hide that it was “Outlander,” which was so funny. It was actually lovely, the pretext that they wrote about what Malva was trying to do in the scene. So I already knew this is a juicy character. One of the scenes was the accusation scene that we’ve just seen in Episode 6. So I knew that there was some dark stuff going to go down. It wasn’t until I got the part and I started reading the book that I realized, like, oh my God, these are the worst circumstances of a character of any person I’ve ever come across. I was just thinking I couldn’t imagine anything worse happening to me. It’s a Greek tragedy. 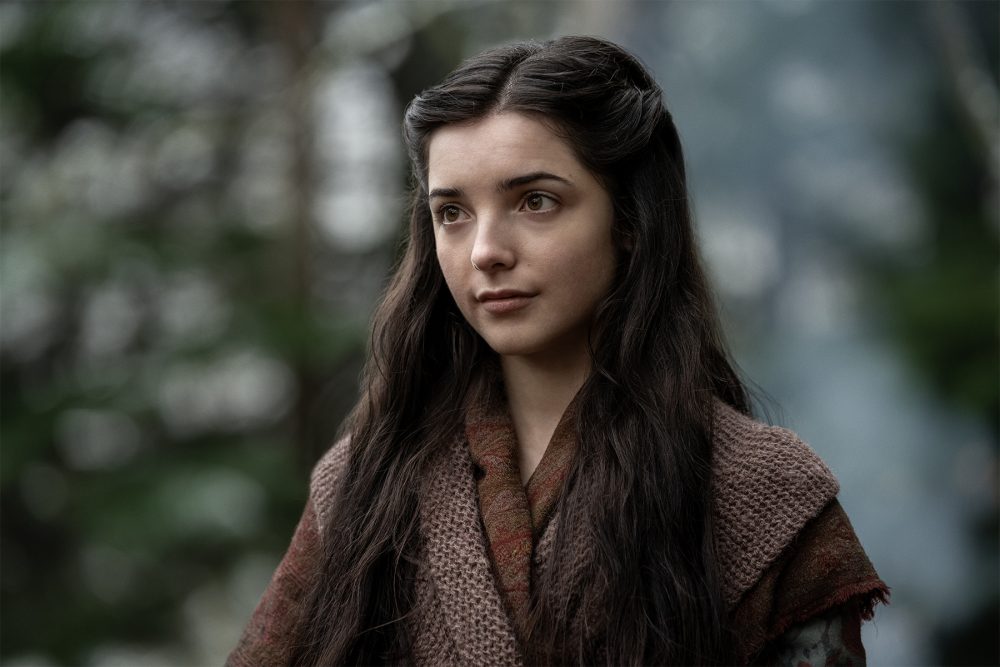 Malva’s time was short-lived on “Outlander” but she made an impact nonetheless. How do you feel about her overall story arc for this season?

Like you say, it was so short but so impactful. It gave me that perfect amount of time to have that arc. Within each episode, we’re peeling back a layer. When it starts, she’s inquisitive and she’s a big people pleaser. I think she’s trying to be as genuine as possible. You know, there’s a lot of debate whether everything that she does is calculative and manipulative. Personally, I don’t think so at all. I think she’s so young and she’s just doing what she thinks is best at the time. There’s actually like a specific point with Malva that she starts to really act out and starts to play out these horrible actions. It’s because of her circumstances. The way they wrote it, it was brilliant. It gave me such a clear structure of, okay, this is what she’s going through and hence she’s acting this way.

Malva became pretty close to Claire this season – as Bree even jokes in this episode, Malva has been “glued” to Claire ever since she started as her apprentice. What was your experience working with Caitríona?

I think the brilliant thing about Caitríona is she’s so present. I think that’s what I learned the most on set. She’s able to be funny Caitríona and then bam, switch to Claire. I think coming onto that set of such a big machine and with such brilliant actors and someone like Caitríona, there was that admiration there as me, as Jess, the actor, which Malva also has for Claire. It was a parallel and made acting those sorts of scenes easy. I don’t think we even had any conversations prior to. When I think about what we were doing in those scenes, the kind of chemistry and what that dynamic was, it was just there naturally.

In this episode, there are two heavy scenes that play out between Claire and Malva. First, when Malva claims Jamie is the father of her child and the two were having an affair while Claire was ill. The second, when Claire gives Malva a chance to tell her side of the story, and Malva furthers claims that Claire is a witch. Which of those was the most challenging for you?

The accusation scene, obviously, that was a big one. That was my audition scene. I was like, this is what we’re building up to. It’s so pivotal in the book as well. We spent a long day doing that scene and it was like a six-pager, which is pretty long for TV. It was brilliant. I have so much to say in it as well. There’s a lot of text for me. It almost felt like theater that day, because it was such a long thing and so many dynamics. There’s Sam and Cat and Mark [Lewis Jones] and Alex [Vlahos] bouncing off each other. It was great doing it. When I watched it, you could see Malva obviously doing the plan that was laid out for her, this calculative thing, and she kind of cries and she gets upset. There’s also this parallel you kind of see that she’s well — that I saw anyway — that she’s so sorry that she has to do it. Like in the tears, she’s sorry that she’s doing this to Claire, but she has to. And it was really tough to film at the start, because she’s going in devastated and there’s that mix of manipulation, but also fear. There’s so much going on. So it was tough. But then to be honest, by the end of the day, we were all in cahoots laughing and I was like, I can’t do this scene anymore.

How do you feel Malva’s death will affect everyone at Fraser’s Ridge, especially Claire?

It’s a really interesting thing about the Protestant community coming over to the Ridge and putting all this blame and all these superstitions and this witch ideology on Claire again, even though she overcame that in Season 1. It’s going to impact her greatly. But then you’ve got that personal aspect for Claire. She loved Malva. Maybe it’s her thinking why can’t she have done more? I think it’s going to be tough. It’s interesting seeing a lot of the fans say “Why can’t Claire see that she’s evil and she’s manipulative?” Malva has a lot of sides to her, and ultimately I think she is a victim. I think Claire sees Malva as a victim as well when things were revealed. Also, it’s trauma after trauma for Claire, right? She’s processing the rape of last season, and then Malva distracts her. She’s got a lot of things to look forward to. And now it’s another blow. How much trauma can one take on?

And for Malva herself, it’s a sad ending for a character who had a lot of promise. Her story speaks to many women of that time where curiosity and intellect were looked down upon.

Exactly. She could have gone either way. I think that’s such an interesting point about someone that’s just interested and keen and everything is ostracized. When you first see Malva, a lot of people see her as so intense. She is intense and she’s a little damaged, even from the start before she gets pregnant. But to me, I see that as interest, as an eagerness to learn. You can decide whether or not you think it’s always genuine. I genuinely believe and see a young girl that wants a better life, wants to break free, that wants to escape and wants to reach anywhere near the heights that Claire did. Unfortunately, that’s not the path that she ends up on.

What did you enjoy most about coming onto the series and taking on this character?

It’s the fans — and obviously, production was incredible. And having a character like this, I feel I was so blessed and lucky to play someone so interesting. I don’t think that comes up often. “Outlander” is great at these complex, paradoxical, intense women. It’s such an honor to do that, especially in a period piece. But secondary to that, the fans have just been so cool and so passionate. I understand that feeling of being a part of something and that escapism you can get from television that you really love. I love seeing them kind of hit at Malva and then kind of feel sorry for her. It’s great to see them digest and interpret my work.

This interview has been edited and condensed.