The Duke and Duchess of Sussex will be aware that missing the Duke of Edinburgh‘s memorial service for Prince Philip has made them look ‘petulant and rude,’ a royal expert has claimed.

Prince Harry, 37 and Meghan Markle, 40, were notable in their absence as the Queen, 95, senior royals, politicians, European royals and friends gathered in Westminster Abbey to pay tribute to Prince Philip.

The couple, who live in Montecito, California with their son Archie, two, and nine-month-old daughter Lilibet, announced in March they would not come to the UK for the memorial.

The Duke, 37, is pursuing a legal challenge against the Home Office after being told he would no longer be given the ‘same degree’ of personal protective security when visiting from the US, despite offering to pay for it himself. 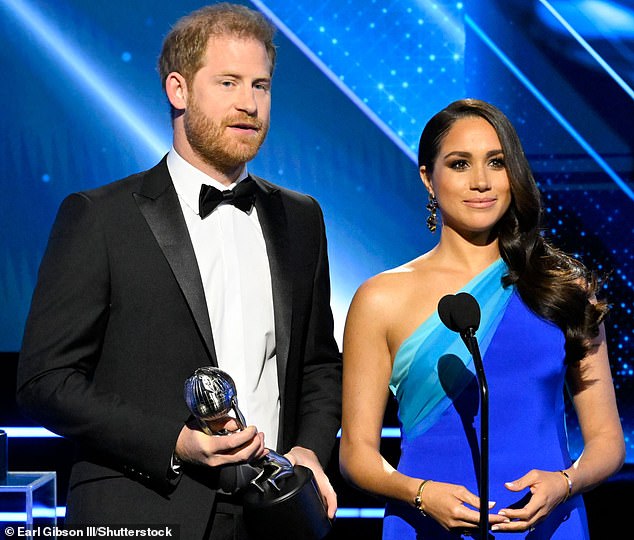 Prince Harry, 37 and Meghan Markle, 40, shone by their absence as the Queen, 95, the royal family, politicians, European royals and friends gathered in Westminster Abbey to pay homage to the Duke of Edinburg earlier this week (pictured at 53rd NAACP Image Awards Show in LA in February)

Royal author and editor-in-chief of Majesty magazine Ingrid Seward, who penned Prince Philip Revealed, has told The Mirror the couple ‘missed an opportunity’ by not attending the service.

She added they would have been aware of the optics of their decision not to attend, and that it would make them look ‘petulant and rude.’

‘Harry must have known it would look petulant and rude. And if he did not Meghan would have,’ she said.

‘The wall of silence was as loud as if they had shouted from the abbey rafters. The normally verbose duke and duchess of Sussex said nothing.’

The expert pointed out the couple, who have been vocal about royal milestones in the past, were noticeably quiet on Tuesday and refrained from addressing the event on their social media or through their spokesperson and did not send flowers to be displayed at the Abbey. 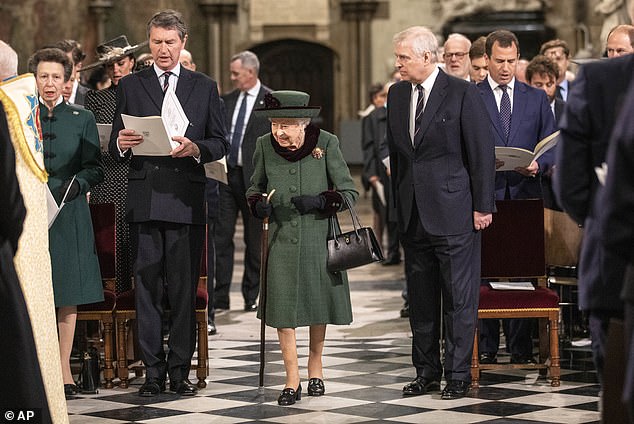 The Queen was escorted to her seat by Prince Andrew, 63, on Tuesday as she arrived for the memorial service

Seward also criticised the fact the Prince did not offer an explanation when he announced him and Meghan would not be attending the service a few weeks ago.

The royal author did not buy into the argument that the royal was afraid for his and his wife’s safety because Westminster Abbey was peppered with security agents and police officers protecting the members of the royal family and politicians in attendance.

She added that the couple’s presence would not have distracted from the Queen, who was front and centre of the event and called their absence a ‘missed opportunity’ for the couple to reunite with their relatives and for Archie to meet his cousins. 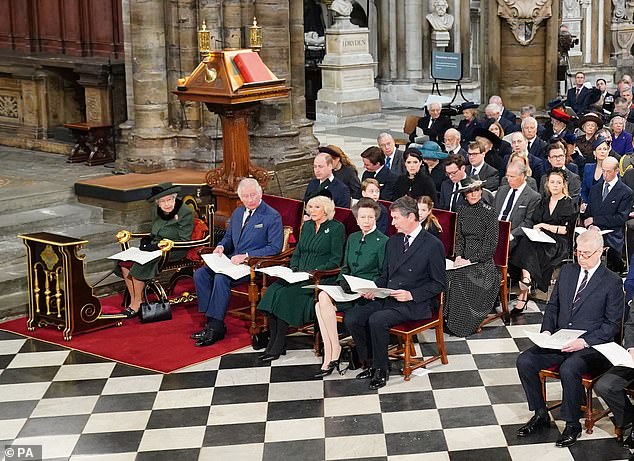 Prince Harry was the only major royal figure not to attend Prince Philip’s memorial service on Tuesday. Controversially, Prince Andrew took a starring role in his first public appearance since agreeing an out-of-court settlement with Jeffrey Epstein victim Virginia Giuffre

She concluded that Harry will live to regret not coming to the event, which was his last chance to pay his respects to his grandfather the Duke of Edinburgh, and that he has offended too many officials too many times.

However, royal biographer Angela Levin questioned whether Harry will ever recognise his ‘appalling behaviour’ after being the only major royal figure not to attend Philip’s memorial service.

‘He is such a changed person, it is difficult to know if he will even regret not attending,’ she told The Sun. ‘The Harry I interviewed was caring and kind and instinctive. Nowadays, he is so full of resentment and “me me me”.

‘He doesn’t seem to have any broader range to care about things unless they are things impacting him and Meghan.

‘Many royals from abroad made the effort, yet Harry’s pathetic excuse is that he didn’t feel safe. The police would have had it completely covered. The royal children were all there, the heirs to the throne, so it just doesn’t make any sense that the protection wouldn’t be there.’ 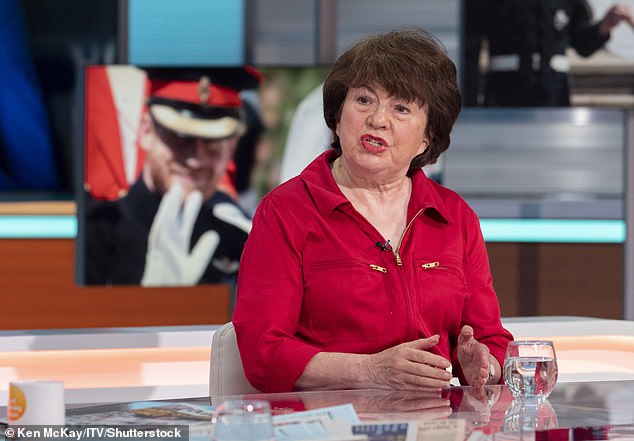 Mr Griffin said: ‘Prince Philip was their grandfather so William has obviously had a great training from him and is going to learn examples from him. I just hope Harry gets some of these things in his mind.

‘It [Harry not being here] was a big disappointment for everybody. People were talking about it. Certainly around where I was people were saying he should have been here.

‘All this nonsense about how he couldn’t get protection, as far as I’m concerned that was a pathetic excuse. He should’ve been here to honour his grandfather.

‘At the end of the day, if he was that worried about security, he could’ve stuck with his brother and father who have got wonderful security and he would have been more than safe.’

Other royal watchers also slammed Harry for being the only senior royal to miss the tribute to Prince Philip, with GMB presenter Richard Madeley asking: ‘What is he playing at?’ 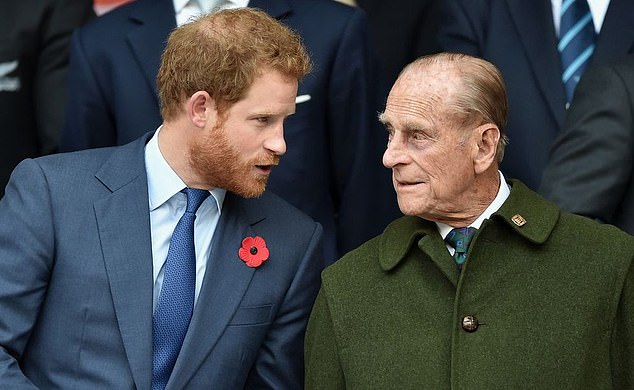 Prince Harry and Prince Philip at the Rugby World Cup at Twickenham on October 31, 2015

Harry last returned to the UK eight months ago to unveil the statue of his late mother Diana, Princess of Wales in London on July 1 with his brother Prince William.

However, he does plan to fly to The Hague in the Netherlands in two weeks’ time to attend the Invictus Games for injured military service that he set up.

The Games run from April 16 to 22, which means Harry would have the opportunity to visit his grandmother for her 96th birthday on the 21st.

On March 11, a spokesman for the Duke confirmed that he would not return to the UK for the service – but added that he hopes to visit his grandmother soon.

In April 2021, Harry flew back from California, without Meghan who was heavily pregnant at the time, to attend Philip’s funeral at St George’s Chapel in Windsor.

Royal author Phil Dampier told MailOnline ahead of the event: ‘It’s very sad that Harry and Meghan won’t be at Prince Philip’s memorial service and I think one day Harry might regret it.

‘He has said that he doesn’t feel safe without Scotland Yard security but to me that sounds like an excuse not to come back to the UK and indicates the rift with his blood family is still bad.

‘Harry was always very fond of his grandfather and was deeply honoured when he took over from him as Captain General of the Royal Marines, but sadly that didn’t last long.

‘The pair attended some Remembrance Day events together and there was always a rapport between them, both being serving military men who had seen active service.’

Mr Dampier said that Harry ‘loved’ Philip’s sense of humour and praised him in interviews, adding that this makes his non-attendance ‘all the more mystifying and strange’.

He continued: ‘You get the impression he is still very hurt by what has happened between him and his father and brother, and I’m sure they feel the same, but to miss a memorial for his beloved grandfather is tragic.

‘Harry did fly over for his funeral and for the unveiling of the Diana statue, but hasn’t been back since.

‘He will be at the Invictus Games in The Hague, but there must now be great doubts about whether he will attend any of the Queen’s Platinum Jubilee celebrations.

‘I’m sure the Queen is very upset he’s not coming tomorrow but she realises she can’t make Harry alter his mindset at the moment.’