Rosie Perez was p—– off at Woody Harrelson, Wesley Snipes after the Oscars – Fox News

Woody Harrelson and Wesley Snipes “p—– off” Rosie Perez at the Oscars, the actress has revealed.

The three stars, who starred in “White Men Can’t Jump” together in 1992, took the stage at the 94th Academy Awards on March 27 to present the award for best cinematography. Their reunion at the show commemorated the 30th anniversary of the release of the film.

Perez appeared on “The Daily Show” on Thursday night, where host Trevor Noah reflected on the memorable moment with her, Harrelson and Snipes.

“You were one of my favorite moments of the Oscars, just that scene of the reunion of the cast of ‘White Men Can’t Jump,’ that was really cool to see on stage.” Noah said. 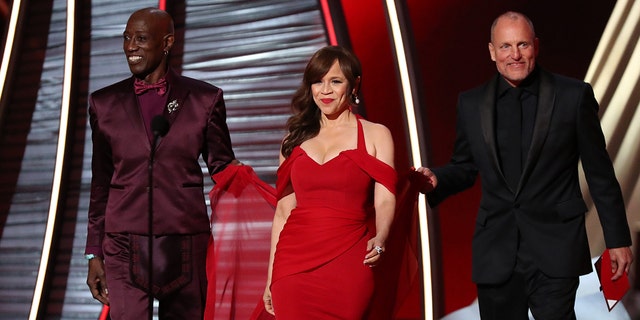 That’s when Perez revealed she was actually “p—– off at them.”

Turns out, it had a little something to do with Perez’s head-turning Christian Siriano red dress.

“Because I just said to them, ‘I have a train, just pick it up ’cause they had it set back … fluff it, let it go and let me walk out.’ They said ‘OK.’ And then I see on the playback they were holding it the whole time cracking up,” Perez said.

“And they were high off their a–es,” Perez continued.

WILL SMITH’S LONGTIME FRIEND JAZZY JEFF COMES TO HIS DEFENSE OVER OSCARS SLAP: ‘IT WAS A LAPSE IN JUDGMENT’ 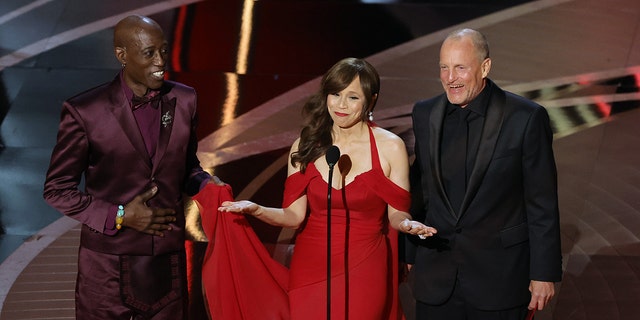 “I thought that was a joke, no?” Noah reacted.

“No!” the “Flight Attendant” actress insisted.

Photos show Harrelson and Snipes holding Perez’s dress while onstage presenting. Despite the humorous moment, Perez was praised online for her glamorous look. But her co-stars from the ‘90s weren’t the only ones who made a fashion faux pas at the awards show. Jason Mamoa accidentally stepped on the long train of Perez’s dress while on the red carpet.

Perez spoke of the moment in an interview with “Entertainment Tonight” later. 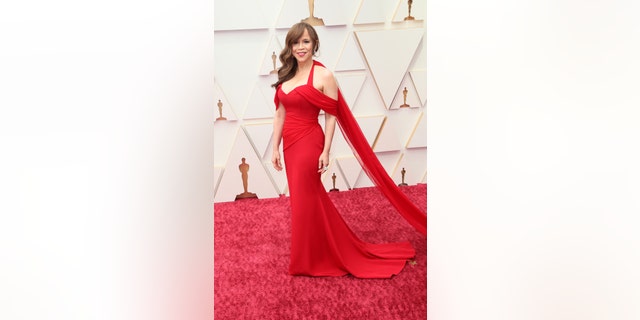 “It was funny because he kept stepping on my train. I go, ‘scuse me, ’scuse me,’ and he was about to step on it again, and I turned back I saw him bowing… It was cute,” Perez said.

Aside from getting glam and seeing her old co-stars, the ceremony was also special for Perez in that it was her first time being invited back to the awards show in 28 years. 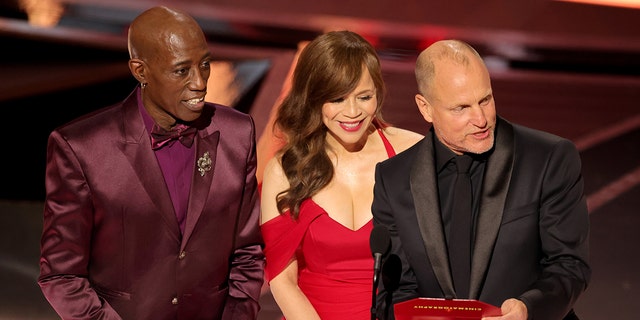 “Not even to sit in the audience, not to present, nothing – and I’m a member,” Perez told Variety when discussing her absence from the show in nearly three decades in 2021. “I love the Academy Awards. I cheer on my peers, but it hurts. It’s like when your home team doesn’t ask you to come back into the stadium after you got up to bat and hit the home run.”